A general forum about railways for all non - Greek friends. In this place you can use only English language.
Απάντηση
70 δημοσιεύσεις

I hope to do some scans today, by the way (too exhausted on weekdays :( )

hallo..........Today I present to you the photo story written on a website dedicated to my little world I hope you like rail thanks andrea friend .... the idea of ;putting on his various web plastic rail is established with the aim of giving visibility to fans for free by publishing their works directly to a page dedicated to them, while putting in available to all, educational end, a section from which to get ideas for their own models or dioramas.,. 'only in Italian sorry.............
:imsorry:
the LINK
http://www.scalatt.it/fotostoria_plasti" onclick="window.open(this.href);return false; ... croato.htm

:)
hallo today i present the railways in ho of yugoslavia with the steam locosteam class jdz 11 DŽ / JZ 11 ili MAV 424 first year 1924th Fabric GANZ MAVAG a Hungary locomotive.
Where we were ukupno 63 locomotives these series. From rigid locomotive 001-013 su su ex MAV dock 014-063 withdrawn u periodu from 1946th to 1955)
Series 11 is where the called blue train "Plavog wagon" of President Tito. For the purpose here was designed to su 11-015, 11-22 and 11 - 23 Nakon stopping vuče "Plavog cart" 1958th narednih dvadesetak years old radile su redovnom saobraćaju. Početkom 80th - Quiet restored su kao i set museum exhibits u Ljubljana, Zagreb, Belgrade, i.
Locomotives Series 11 withdrew from the 70th - 80th - The last steam locomotive repaired u Fabrice "Janko gredelj" was a 11 - 041with a small ceremony is abandoned factories years 1976 thin Slovenia have not been scheduled. Occasionally, it led us to the Blue Train which is used for their needs Tito.
Points of interest: said series was the most perfect machine Hungarian origin. The area of ​​the former kingdom is between 1924 and 1944 were 13 locomotives of the series. Between 1947 and 1955 but still 51 locomotives. For Tito's Blue Train hauling were assigned to three locomotives (11-015, 11-022, 11-023). These three locomotives were painted in blue color so that the color match with the rest of the train of cars. With the advent of diesel traction are for the blue train orders in Germany three locomotives type V300 (JZ Series 761), and later also replaced the JZ Series 666 (four locomotives).
After replacing the loco fleet, have been awarded blue beauty in a regular job. Also, our retirement is to perform only the "normal" work. The said engine was replaced in 1981 by Slovenian electric locomotive series 361 (Museum Exchange), restored and set in Kranj, where there was a so-called "Tito track". Later it was moved to the museum, where it is located today.

the model is not complete correct
look the photos

Slavko Jovanovic from Serbia makes in H0 the JZ/MZ model 661.4xx with the long nose! 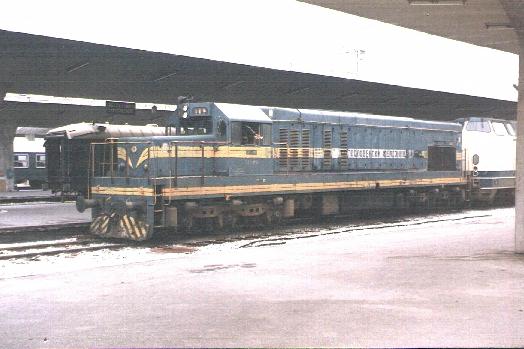 hallo today i present the model roco rail traction company siemens 189..... After the locomotives Bombardier E 186 variant DAI and after Siemens E 189 with the design "blue zebra" comes the second of Lokomotion Siemens E 189 with the design "red zebra" and that the new layout of the RTC, the 189 904.
E 'out January 17th workshop of Kassel in Germany, the second machine Siemens E189 branded with the new layout of the RTC.
The work of complete repainting required a major effort by the technicians of Kassel, however, rewarded by a truly exceptional.
Soon, we hope the "brand" 904 in Italy, in the certainty that can make the happiness of the many photo-enthusiasts professionals.........
THANK TO MODULNE MAKETE JESENICE
the MODEL :okay:

the link of my friends
http://dlz.ilbis.com/" onclick="window.open(this.href);return false;